The Gospel of Rick and Morty

April 29, 2017
OK, maybe that's overselling it a bit. It's not exactly about the life of Jesus is it? But it is good news, in its own weird way (and what better way is there than weird?)

The thing about Rick and Morty is that it's not a lead-by-example type of good news. It's not the life of a saint or anything, but you knew that. What I appreciate about the show is that it takes the other approach, and it takes it hard (hehe). By that I mean, it teaches by dis-example. It's the 'don't do this, look how bad it turns out' kind of thing. And it does it while being silly, and weird, and human. 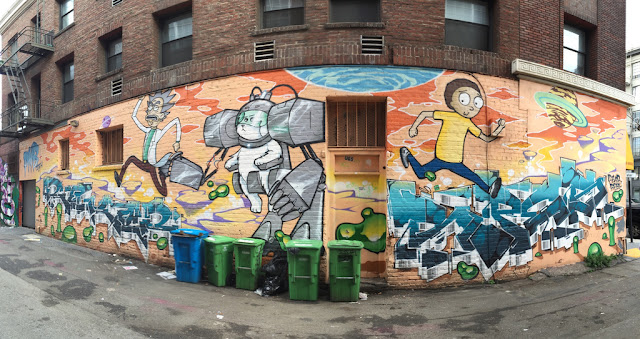 Is anyone in Rick and Morty good? Certainly none of the main characters (Birdperson, maybe, but he's only in like 4 episodes). Rick obviously isn't. He constantly puts his family in danger to chase down trivial pleasures of the flesh: an orgy with an alien hive mind, space drugs, the universe's greatest ice cream. Morty inclines a little more to humanism, but he still prioritizes his lust over, say, the free will of his crush Jessica. Morty's family similarly are all concerned primarily with their own pleasure, how others see them, not losing their own penis to save a great philanthropist.

But for all these pursuits of material gratification, is anyone in the show happy? Again, the answer is a clear "no". About half the episodes are driven by one of the cast seeking happiness in some externality, hoping that Rick's crazy science might be powerful enough to bring them that which our world's regular science has failed to: joy, fulfillment, love.

When I watch Rick and Morty, I cry. Almost every episode makes me tear up. I cry for myself when I've distanced myself from God and the peace they bring. I cry for joy because I don't have to feel the way the characters in the show do, because I know the source of joy, fulfillment, and love.

While remaining hilarious and relatable, the show is a warning, that no matter the technology and distractions that you can procure, no matter the adventures you pursue, the diversions you consume, none of these will bring happiness and meaning. The show doesn't go into the answers, and a few episodes make it clear the creators' stance on religion, but God's teachings permeate our culture anyway. As long as we enjoin our will with God's, we don't have to worry about the nihilism that the cast of this silly cartoon feel. True peace comes from God, and knowing that is a great peace in itself. And may that peace be with you also.