October 15, 2019
St. Teresa of Avila is known for many things: Being one of the main counter-reformers, helping to restore order and justice to the Church following the reformation; her influential writings on mysticism; levitation; founding numerous small convents and the order of the Discalced Carmelites; being investigated by the Spanish Inquisition (how unexpected!); and one of the most, erm, memorable accounts of a spiritual encounter.

Ok, have we all read that account? Have we all seen the artistic depictions?


I saw in his hand a long spear of gold, and at the point there seemed to be a little fire. He appeared to me to be thrusting it at times into my heart, and to pierce my very entrails; when he drew it out, he seemed to draw them out also, and to leave me all on fire with a great love of God. The pain was so great, that it made me moan; and yet so surpassing was the sweetness of this excessive pain, that I could not wish to be rid of it...
-St. Teresa of Avila, Autobiography 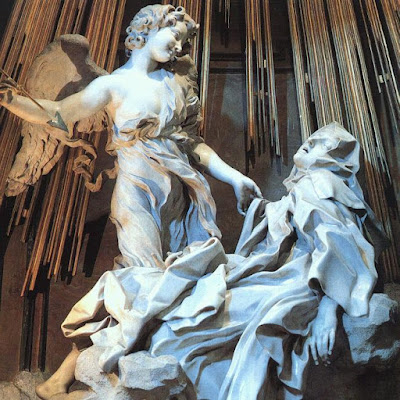 St. Teresa was an astonishingly devout woman. She subjected herself to the questionable whims of her confessors, rose up against the bureaucracy and corruption in the church, battled sexism, and submitted to investigation by the Inquisition for her troubles.

Between founding convents (sixteen in total before her death), she was an avid reader, and wrote several books on mysticism, including the still widely-read Interior Castle. Her influence on mental prayer is included in the Catechism of the Catholic Church and may have inspired St. Ignatius of Loyola's Spiritual Exercises.

While being investigated by the Spanish Inquisition because they doubted the veracity of her mental prayer and visions, Teresa's confessor recommended she write her Autobiography (much better advice than having her make rude gestures whenever she had a vision of Christ...) She cleverly used the Inquisition's own misogyny against them in this book and was released of any charges.

Despite the near-constant roadblocks by those in power who saw her call to submission and prayer as a threat to their station, St. Teresa went on to found a monastic order, reform dozens of monasteries, challenge women's role in the leadership of the church, and expand our view of what prayer can look like. She was declared the first woman Doctor of the Church in 1970.