February 25, 2018
Gonna mix things up a little today. Here's a poem I wrote; it's called Conversion, and it's inspired by a time last summer when I watched a cicada molt. The process took about 2 hours, and I was struck as I watched it how vulnerable the bug was while it shed its old exoskeleton. I'm no apex predator, but I could have killed it at any moment during the process if I were inclined.

If you've never seen it, it's something to behold. The cicada splits open down its back and shakes and jerks until it can pull its entire body through the crack. Here's a time-lapse video of it, but it's astonishingly cooler in real life and at real speed.


The cicada's vulnerability during molting, in at least a metaphorical sense, reminds me of the process of my conversion to the Catholic faith. It was slow, and hard, and terrifying, but it was the only choice for me, despite the perceived dangers.

I started this poem during one of my morning prayer walks and it really flowed from there. I raced home to jot it down before it could flit away, and I've gone back to it a few times since to tweak it.

I really like to use bugs to talk about religion. If that intrigues you, you should check out my published poem Gods in the Ground in Recompose Issue 3.

I cling to the tree
And quiver.

In agony,
I contort to escape
The too-tight shell
Of my own creation:
Formed to protect,
But grown too tight --
Too limiting.

I am split open
And from the split
I emerge
A new thing --
Vivid, bold,
Unhardened.

My soft
New
Wings
Unfurl in the sunlight
And I prepare
To fly.

Today, my wife found a cicada molt in the yard. Thinking of this poem, she gave it to me. I've placed it on our mantle: 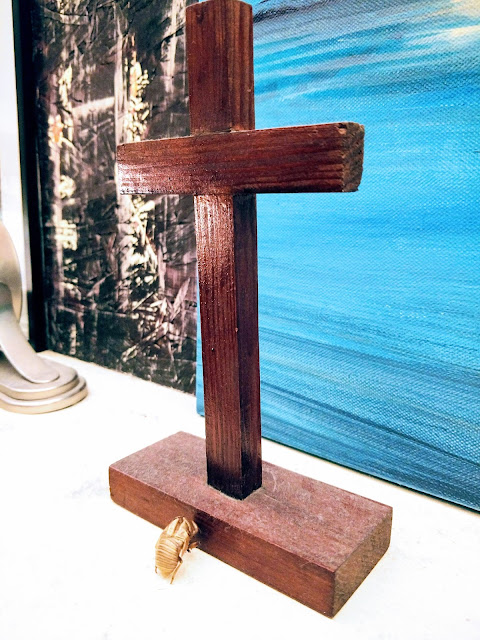