February 14, 2018
When my wife started exploring the Catholic faith, confession was one of my big hangups. It wasn't the act of a human having the power to forgive sins, which is strongly supported in scripture, and to a wide degree also practiced by the Protestant churches I had been involved with my whole life. Instead, my issue was with the authority given exclusively to the priesthood on that front, as with many others. The confession booth is a popular trope in television. Sometimes, it seems characters are made Catholic just so that they can dump their guilt in the confessional for the viewer's benefit. Daredevil (pictured above) on Netflix takes the faith of the protagonist a little more seriously, but the Sacrament of Reconciliation is still one of the most forward ways we are shown about the character's religion. We don't see him partaking in Eucharist. I don't recall him ever praying a rosary or even the Our Father. We don't see him fasting or praying for the intercession of saints. I don't think we ever even see him attend mass, yet his confessions are front and center.

Obviously, part of that is its use in character development. You get to show how bad he feels for all the bad guys he beat up by having him lament it to the priest, who then gives him a mild penance and he goes out to beat up more bad guys. It's an easy way to get him to vocalize the inner turmoil that otherwise wouldn't make sense to say aloud.

Still, there's a power and mystery to it that transcends its utility in media, and I think part of its popularity in shows is because of exactly that. 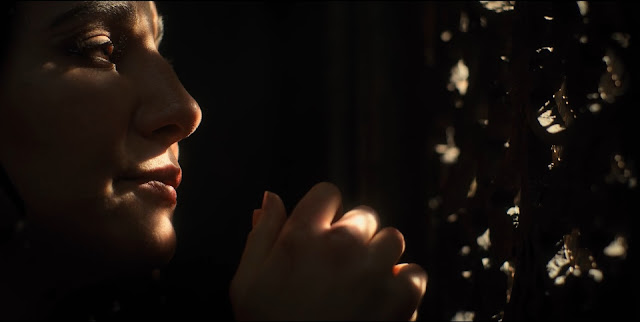 In Altered Carbon (pictured above), also on Netflix, one of the characters is a lapsed Catholic who is not allowed to participate in the sacraments. There is a powerful scene early on where she sits behind the screen and unloads her sins, only to reveal when she gets up to leave that the confessional was empty and there was nobody behind the screen to grant her absolution.

That's how silent confessions and corporate absolution such as I've experienced as a Lutheran, Reformed, and Presbyterian have always felt to me. Sure, I believed that God forgave my sins and that it was good to speak them in the silence of my heart, but it's hard to conceptualize forgiveness in that way. I never left feeling like anything was changed.

So one day, I set aside my frustrations with the Catholic Church and went into the confessional. I had researched a little beforehand, and prayed, and examined my conscience, but I barely knew what I was doing. I was nervous. I had a huge list of sins from throughout my life to confess. I was confused and lost, but I went in, faced the priest, and tried it.

But I soon realized that I was much more hesitant to fall again into the sins I had confessed. Eventually, I did stumble again, and I found myself craving to go back even though I didn't believe the priest had any more power than the rest of us to forgive my sins. My Protestant pastor didn't hear confessions; it's not like I could drop in anywhere else to share all my failures and know that the recipient wouldn't share them with others, wouldn't judge me for them, and would invoke the God-given ability to loose them on earth as in heaven. So a few months later, I went back.

And then, a few months after that I went back again. And I started to notice something. I felt unburdened after confessing. I worked harder at work and I enjoyed it more. I felt closer to my family, and paid more attention to them and less to my phone. And most importantly, I was growing closer to God. I was sinning less -- not wanting to have to keep confessing the same struggles again and again gave me strength to resist succumbing. And all this time, I was still Protestant.

I became a confession junkie. I go to confession every week now, even though I still can't receive Eucharist.

The power and mystery that the media so enjoys about the Rite weakened my defenses and my distrust of God fell away. When I started to trust God, my distrust of the church also fell away. I was confronted with the beliefs I proclaimed and the hypocrisy I practiced, and I eventually recognized what God was asking of me. I'm joining the Catholic church this Easter, and Reconciliation has played a large role in my conversion.

If you're still thinking about how to draw closer to God this Lent, consider taking up confession. You don't have to be Catholic, and the priest will help guide you. It's amazingly unburdening just to speak your sins, even if you don't believe in the sacrament itself. Worst case scenario, someone hears your struggles and tells you that you are forgiven. Even if there's nothing mystical going on there, it's still a great feeling.