April 11, 2017
The history of the church is full of weirdos and outcasts. In fact, the early church by its nature was almost entirely composed of such freaks, until it was forcibly mainstreamed by Constantine, but that's a whole different topic.

Freak Spotlights are where I talk about some of my favorite notable weirdos in the church, and what better place to start than the weirdest of them all, Dutch painter Hieronymus Bosch?

Bosch is a well known artist whose work is noted for its busy and extremely surreal imagery. He predated the surrealist movement by a few centuries, but his work clearly demonstrates many of the traits embraced by the noteworthy likes of Dali and Ernst.

The coolest thing about Bosch for me is how he embraced both dark and twisted subject matter as well as Christian tropes. Perhaps his best-known piece, the Garden of Earthly Delights, illustrates this juxtaposition: 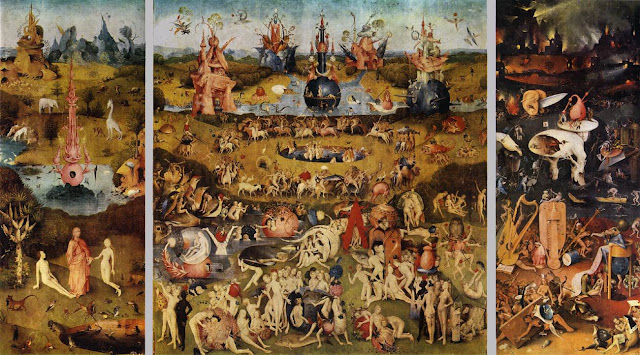 There's a lot going on here, but as you look closer you start to see the absurdity and depravity. It's a triptych that's meant to be read as a sort of story: in the left panel is the Garden of Eden, a perfect paradise of harmony between all creatures. In the center panel, the Fall has broken that harmony into a desperate pursuit of pleasure, and in the right panel the fickle humans suffer for their conceit in a hellish landscape populated by bizarre demons.

I'm not typically big on the fire-and-brimstone approach, but if you're going to do it, you might as well do it the Bosch way. Make it interesting. Make us feel for the pursuits of the sufferers. And make it weird.

Sometimes, however, it's not so clear: 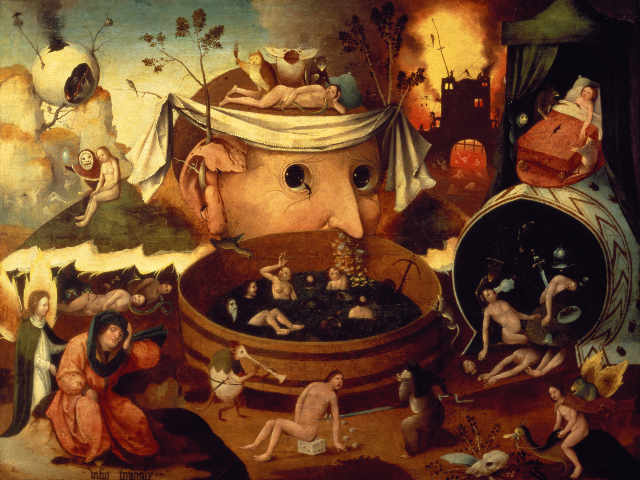 Honestly, I'm not particularly interested in researching what exactly is going on here and what symbolism Bosch is using, though his work is understood to be extremely symbolic despite its extreme deviance from reality. I just like looking at it, taking in the weirdness, and knowing that it was made by a man whose work was centered in Christ, even when it wasn't always apparent. And it's nice to see christian artwork that isn't all sunsets and rainbows, or Jesus and Mary everywhere.

Bosch helps me remember that we are all created uniquely for a divine purpose, and trying to be something else because that's the view you have of what it means to be a christian is a perversion of that purpose. Freaks need saints too, and the more mainstream the church tries to be, the harder it can be to remember that.